Frank Owen has written a wonderful personal account chronicling the violent emergence of Manchester’s punk scene in the 1970s. A mixture of reminiscence, social history, chronicle & photo essay, it’s a gripping read about a febrile moment in musical history. 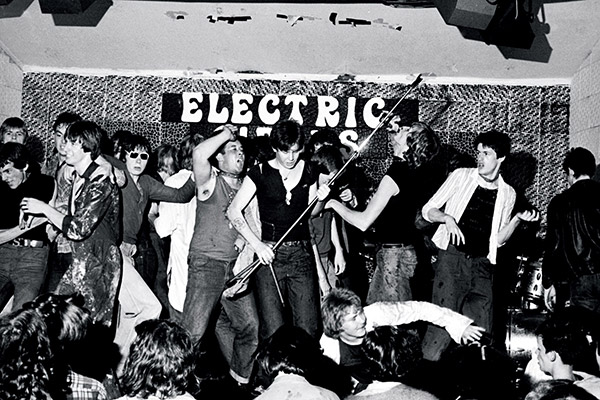 Things get out of hand at the Electric Circus. Is that Stephen Morris at the right?

The Manchester scene exploded after a handful of now-legendary performances by the Sex Pistols, with sometimes 20 or fewer attendees. But those attending the shows went on to become members of Joy Division, the Buzzcocks, the Fall & included even bloody Morrissey from the Smiths (who was already cultivating his young fogey persona).

As a transplanted American, I have a doubtless skewed take on British punk, skewed still further by my own personal tastes. Most Americans will think of British punks as the blokes with the multi-coloured, spiked hair you’d see strolling around London back in the day. Not me: Manchester was the place, partly because my musical interests lean more towards post-punk, and Manchester was instrumental (ha ha) in its development. Intellectual & arty in a way that London punk was not, Manchester punk held greater appeal.

I still recall when I first moved here & a colleague of my wife’s was talking about Manchester. I remarked to the man (a young fogey himself) “Ah, what a legendary music scene”, to which he responded “Mmm, yes, the Hallé Orchestra”. How can you reply to that?