Jeffrey Zeldman—whose site always provides a good read—has been in a reflective mood recently. One article is a wonderful comment on divorce, an example of the most humane thing we can do under such an awful situation—and something that’s incredibly hard to do, of course.

The second article—Family Ties—is more gut-wrenching. A dispassionate reflection on our consistent inhumanity to those we ostensibly love, it brought up a lot of family memories of my own, stories related to me by those who dimly remembered them in the first place & that families prefer to keep buried. Many of us have little idea of the horrors endured by our own relatives, let alone more distant ancestors. But some of us do.

The stories I was told calcified into a big reason why I was so hesitant to have a child of my own—I worry how much rage and madness is within me & which I’ll pass onto my son. Nothing has yet happened. Yet. And that’s the worry, of course—you don’t know what, if anything, is dormant within you and your child & you’re not likely to know until it’s too late. My son is a phenomenally happy boy, but like so many others, he carries a heavy inheritance.

How We Used to Do It

Not that long ago—well within living memory, in fact—the only way to show people your design work was to cart around sheaves of paper, your fingers greasily smudging the edges. We likely forget how long this has been common practice.

Macclesfield Alphabet Book: ornamental detail for lettering of “S” & “A” 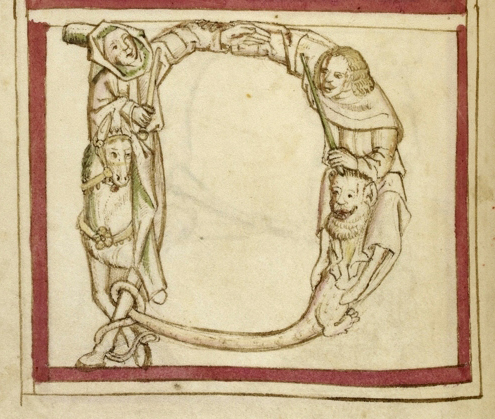 Books like this not only showed potential clients what your house could produce, but it also retained a “house style”—anyone in the workshop could reproduce these images.

It’s been a long while since the ink dried on my Art History MA, but the style doesn’t at all look circa 1500 to me. I think it’s likely to be about 1450 at the very latest—and even then, it’s retained imagery from a far older manuscript. Have a look again at the fashion in the second illustration above: the woman’s fashion looks about mid-15th century & the man’s significantly earlier.

In any event, give me a website any day :)

I Shall Rant About Belkin KVMs Now

On a spare machine in the studio, we had a Belkin SOHO KVM DVI switch. We got it when Ian joined as a partner, so he could hook up his laptop & use the big screen as extra real estate. It was a weird setup: the monitor was VGA (one of those ancient 21″ Apple CRT Displays, a gigantic blueberry of a thing that gave you a hernia by just thinking of lifting it), but we knew that we’d eventually move to a DVI flat-screen, so we worked with DVI-VGA adaptors for years.

It wasn’t without problems. To get it working with the DVI computer & laptop to which it was attached, we needed DVI-VGA bridges; for Ian’s laptop we needed a (get this) DVI-VGA-DVI bridge, otherwise the damn thing wouldn’t work. When we first set it up, the damned thing would screech PIP every second or so when Ian’s laptop wasn’t connected—a frequent enough occurrence as he likes to work from home. We somehow, somehow got that to stop, but the trick was lost in the mists of history & sleepless nights.

When the display finally died, nearly a decade after its purchase, I promptly got a new flat-screen monitor, an Iiyama ProLite, which is pretty nice. Finally, we could rid ourselves of those DVI-VGA/DVI-VGA-DVI bridges. And that’s when everything started going very, very wrong.

You first have to hook in your DVI cables. OK, except for the bonheaded design of the switch: there wasn’t enough room for them. I used a crimper to pull off some of the decorative plastic in a couple of places to make room for the cables. But even then, they couldn’t fit as tightly as they should have. Oh, and the PIP was back, and it wouldn’t stop.

So I Googled other people’s experience of these switches, only to find that other Mac users were in a similar boat. What’s worse, to upgrade the damned thing, you needed a) a Windows computer—so we’re out of luck there, we only use Windows via VMWare Fusion; and b) a PS/2 port on that Windows machine. Despite the fact that it supports USB. Nice foresight there, Belkin.

So in a fit of pique I ordered a new KVM switch. As we were only connecting two machines to one monitor/keyboard/mouse, there was only one game in town: the Belkin Switch. Well, I clearly didn’t learn my lesson about Belkin, because I bought the damned thing, despite the negative reviews on Amazon. And of course, it wouldn’t work when I first started it up. The clue was that the switch button needs to be firmly inserted into the switch (as recounted in one Amazon review).

But then—surprise!—it worked. Great! Back to work. Until the installation of the recent Quicktime 7.6 update, where the computer had to be restarted afterwards. Whereupon the fucker didn’t work again. The switch button clearly wasn’t the issue: it hadn’t been dislodged. What to do?

Until the next restart-required software update. Are you sensing a pattern here? What solved this was, essentially, voodoo: I restarted the computer again, cleared the PRAM three times, rubbed the cat’s tail around my left eye three times counterclockwise & we were back in business.

So Microsoft have distributed the next public release of Internet Explorer 8. If you’re using XP (and who among you, honestly, is using Vista?), you can get it here.

Here’s an interesting note in the “known bug” list: looking at the markup within an iframe tag is impossible if the first item within is a comment. Ohforchristssakeareyouserious.

Posted by Ray Drainville. Filed in Web Design. Tags: how could i have been the first to think this, ie8, web standards

On Friday, Sitepoint posted its latest podcast (MP3 link) with a discussion unfortunately germane to a lot of developers’ work: what to do about Internet Explorer 6. They linked to one of my articles as background material (as if I’m an expert or something).

I found the discussion somewhat strange—as I do all podcasts, really, because instead of a “proper” media show where the participants research before presenting their views, podcasts are the equivalent of nattering around the water cooler.

Much of the discussion whipped around why on earth people don’t upgrade their browser. I mean, c’mon. There are lots of reasons for this & if you’ve ever worked in a large corporate atmosphere as I did a very long time ago, you can come up with a few more. The prime users of IE6, I’d wager, will be first: those using ancient machines—they’re people who either cannot upgrade or don’t know how to upgrade. The second and far larger user base: those behind corporate intranets, where everything’s been tested in the simplest way possible, with one browser only & one version of that browser only. Lots of corporate intranets use ActiveX & will restrict its usage to IE6 because, well, that’s what they restricted it to. It’s the lazy path to information design, but corporate IT departments—trust me on this—are often filled with lazy people.

But corporate IT isn’t the only lazy culprit out there. Lately, some banks have been caught out using lame browser-sniffing techniques & have thereby excluded the latest browser on the scene, Opera 10, from using their websites because “it’s too old”. (For those interested in why the sniffer didn’t work, it’s because the browser sniffer doesn’t parse more than one digit, so Opera 10 is classed as Opera 1. That’s practically the dictionary definition of “lame”.) And don’t think that standardistas are exempt from laziness: one of the podcast’s participants stated he “didn’t even test in IE6 any more” (albeit for personal sites), which to me is pretty scandalous. After all, the whole point of the web is its inclusivity: the more, the merrier.