The San Francisco International Airport ran an exhbition recently called “When Art Rocked”, a collection of psychedelic rock posters of the 1960s.

Personally, Polish movie posters are more to my taste, but this has a personal connection. My father-in-law, Frank Saul, is prominently displayed, having been photographed in one of the most iconic images of the 20th century. A physical anthropoligist by training, he was helping design space suits (or what were called “extreme high-altitude suits” back then), and the light source helped map people for the close-fitting garments they have to wear.

We’ve got that 13th-Floor Elevators poster up in our house, in fact. How strange seeing it in its full context!

For a series of promotions for the Berlin Philharmonic, art director Björn Ewers created a fantastic series of images playing upon the phrase “Näher an der Klassik” (Closer to the Classics). Each picture is from the inside of a musical instrument (violins, flutes, etc.):

One of a series of spectacular promotions created by Bjorn Ewers

This idea works on so many levels. These images specifically promote chamber music concerts, which are inherently more intimate (“close”) affairs than pieces from the symphonic repertoire, so this concept just spirals back to itself, constantly reinforcing the message.

I’m not sure if this is macro photography or CGI—frankly I can’t see how you could get a high-quality camera into these instruments without destroying them—but no matter. This is a great idea executed perfectly, altering the views inside these rather small instruments into monumental architecture. I would eagerly place these posters on a wall in my home. I can’t think of higher praise than that.

Well, it may be holiday time for many people, but it hasn’t been for us. We’ve been up to (and past) our eyeballs in work, particularly graphic design work, for the past several months. One of the items we’ve been working on is this.

The “Culture & the Mind” Project assembles individuals from a wide range of academic fields to investigate different subjects. This year the focus is “Folk Psychology”: what we, in our everyday lives, do when we attribute beliefs or desires onto other people. One of the questions the conference (and the Project in general) will attempt to do is to examine what aspects of folk psychology are innate, and what change depending upon one’s cultural upbringing.

The client had a great desire to have fun with the poster, in particular to hark back to 60s & early 70s design. I took the opportunity to quote that, but also to pay homage to one of my all-time favourite graphic designers, Steven R. Gilmore. You can only go so far quoting Jefferson Airplane & Skinny Puppy posters, though: psychedelic typography & brain imagery act as visual hooks to make the viewer take a closer look at the content of the conference. 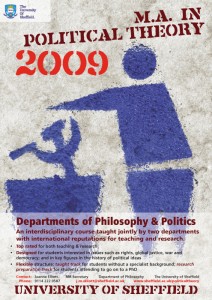 Yonatan Shemmer of the University of Sheffield’s Department of Philosophy contracted us to design a poster for his new AHRC-funded project, “Constructivism in Practical Philosophy”. Because it had to compete with other posters on limited bulletin board space, the design could only be the size of an A4 sheet.

Students of art history won’t be surprised how swiftly we turned to Russian Constructivism for the design. As an art movement, Russian Constructivism was very bold—stark, even, at times. This is ideal for poster design! Particularly when you’re competing against lots of other things clamouring for your interest.

We used a stripe of bold red to differentiate between the activities of the project & its star participants, with smaller stripes to highlight two important items, the link to their blog & information about the conference that’ll be held in in August. We also added a very pale, graded yellow wash over the background—5% yellow up at the top right to white at the bottom. The result is subtle, but when it’s up against other white posters, unmistakable.

More information about the Project can be found on their blog.